Joanie Marx is Your Guide to Living Your Best Life Now! 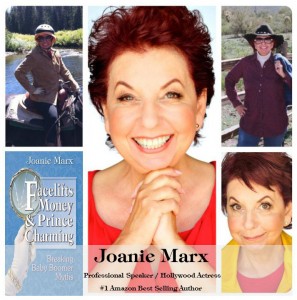 The author of the #1 Amazon Best Seller, “Facelifts, Money & Prince Charming: Break Baby Boomer Myths & Live Your Best Life.”  and a graduate of the University of California, Berkeley, with a Degree in Psychology, Joanie’s multi-faceted career spans both the world of Hollywood and business.

With 30 years as a full-time actress, she has appeared in several national commercials and co-starred in dozens of television shows, films and stage plays. Along the way, Joanie also founded and sold a multi-million dollar business.

A leading authority on breaking Baby Boomer myths, Joanie is on a mission to revolutionize the way all generations perceive aging, love, success and happiness. Her one-of-a-kind style for showing people of all ages how they can live their best life right now, opens the doors of perception for people to discover a new way of embracing and navigating life’s many twists and turns.

Joanie’s unparalleled storytelling, personable sense of humor and a no nonsense approach to overcoming life’s most pressing issues resonates with a wide and diverse audience. Not only is she the ideal choice as a keynote speaker and interview guest, but she is also a go-to-advisor for companies looking to gain valuable insight into how to craft emotionally compelling campaigns to Baby Boomers.

REDEFINES WHAT IT MEANS TO BE A BABY BOOMER

Far from the slow and elderly person that the 55 and older crowd has been portrayed as in the media, Joanie’s role as an outspoken Baby Boomer Advocate is one where no acting is required. She passionately walks her talk and her timely message, coupled with her inspiring career path, redefines what it means to be a Baby Boomer.

Her unparalleled storytelling, personable sense of humor and a no nonsense approach to navigating life’s most pressing issues resonates with a wide and diverse audience, making her not only the ideal choice for a keynote speaker and guest for radio and television, but she is also a go-to-advisor for companies looking to gain valuable insight into how to connect with and market to Baby Boomers.

A leading authority on breaking Baby Boomer myths, Joanie is on a mission to revolutionize the way all generations perceive aging and happiness. As an Amazon #1 best selling author, sought after speaker and acclaimed Hollywood actress for over three-decades, Joanie Marx’s one-of-a-kind style for showing how Baby Boomers and the generations that followed can live their best life, opens the doors to a new way of loving the life we have.

To book Joanie for a keynote presentation, radio or television interview or to inquire how she can collaborate with your company on improving your connection with Baby Boomers, please contact Joanie here.

In the meantime, feel free to review the additional information on this site, such as Joanie’s blog. And be sure to visit Joanie on Facebook or Linked-In.

DRIVE-THRU, MAKE IT YOUR OWN ®: 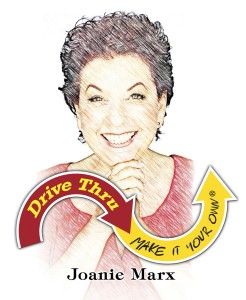 In late 2012, Joanie began rewriting the story of aging and breaking Baby Boomer myths through the popular character she created called, McGranny. It started out as an idea aimed at changing the perception for how Boomers are portrayed through the media, advertising and entertainment industries.

As Joanie has spoken about publicly, and wrote in her book, McGranny isn’t the voice of one person or even a single generation. She says, “The message of the Drive-Thru, Make It Your Own® advocacy campaign reverberates across all generations, most of whom will someday find themselves in the 55 and over crowd.”

To reach the audience this message resonates with Joanie understood the importance of utilizing online and offline platforms that could distribute inspiring, humorous and thought provoking content to reinforce the idea that Baby Boomers are a powerful and influential force to be admired, respected and genuinely honored.  Three spec-commercials were produced and filmed, showing a new and refreshing way Baby Boomers can be portrayed in advertisements.

These engaging and emotionally relevant commercials helped pave the way for Joanie to not only be brought on as a spokesperson and Baby Boomer advisor for major brands, including a hugely popular campaign for Zyrtec in 2015, but it has helped reshape the image of Baby Boomers around the world.

“You took my words and created a multi-dimensional performance with heart. You brought an abundance of life, passion and enthusiasm to the project.”