Is Your Brand Ignoring the Invisible Customer With All the Money™?

You see them everywhere you look, and they are growing in numbers. Accounting for over 50% of all consumer spending, but with only 10% of ad dollars spent to connect with them the 50 and over consumer is the invisible customer with all the money.

With over $3 trillion dollars annually spent on the people and brands they love the purchasing power of Baby Boomers eclipses the entire Gross Domestic Product (GDP) of countries such as the United Kingdom, Russia, Italy, France,  and Brazil.

Why should the Invisible Customer With All the Money™ matter to you?

This audience is getting bigger. The U.S. Census Bureau expects the 50+ market to grow by as much as 16 million people in the next decade, as Generation X gets older. By 2050 the number of those who will be 65 and older in the United States is expected to reach 88.5 million people.

Compelled to do her part in positively changing how the 50+ consumer is perceived and treated, #1 Amazon Best Selling Author, Hollywood actress and respected Baby Boomer Advisor, Joanie Marx‘s expertise and engaging personality can transform and reinvent your brand with the 50 and over market.

For example, when Zyrtec  – America’s #1 Allergist Recommended Brand – wanted to appeal to the 50 and over market Joanie was brought in to play “Mary the Bird Expert” in their wildly popular commercial “Fleets of Owls”. Joanie’s creative instincts for the role and her timely insight on portraying a realistic representation of a 50+ personality helped make Zyrtec’s 2015 Muddlers of America campaign a huge success.

“You took my words and created a multi-dimensional performance with heart. You brought an abundance of life, passion, and enthusiasm to the project.”

Check out an extended version of the commercial here.

According to Joanie: “If you’re in charge of crafting campaigns for Baby Boomers and believe the myth that people over the age of 55 are slow, unsexy and obsolete, you may be prone to irrevocably damaging the credibility of your brand with a demographic that is only going to grow in size.”

But don’t just take Joanie’s word for it. Check out these other revealing statistics:

• Those who are 50 years of age and over in America control more than three-fourths of the country’s wealth, estimated to be as much as $28 trillion (ICSC – U.S. Census and Federal Reserve).

• People who are 50 years of age and older represent the largest audience on the Internet (Jupiter Research).

• With 63% of all financial assets in the United States owned by people fifty and over, their absence on the global advertising stage does not make financial sense (U.S. Census Bureau 2013 Consumer Expenditure Survey, Agency Five-O). 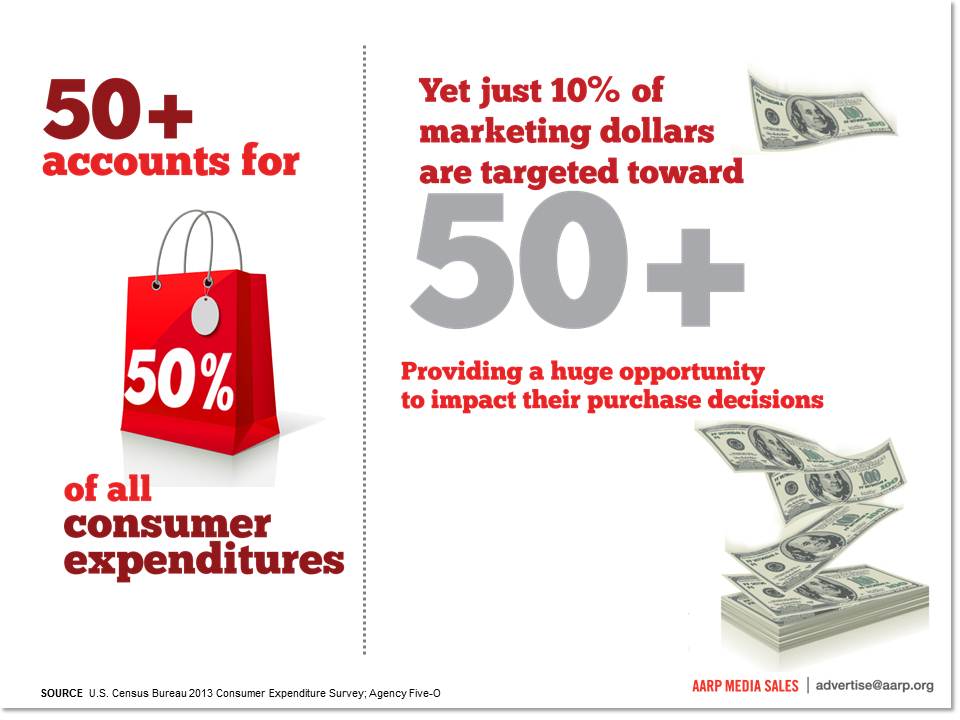 With access to as much as $28 trillion dollars, are those who are 50 years and older a financially viable audience for advertisers to pay attention to the power of their voice? You bet they are. So why are they considered the Invisible Customer With All the Money™? And how can companies take advantage of changing this outdated attitude and in doing so claim the loyalty of a market that is guaranteed to get bigger?

The answer, according to Joanie, is simple. Companies need to know how to deconstruct the 7 Myths that Baby Boomers, and all generations that followed, were raised on.

In a recent national radio interview Joanie boldly addressed this when she said, “If companies want to maximize profits with the largest and most financially viable market in the world, decision makers will want to craft emotionally relevant campaigns that break the ‘7 Baby Boomer Myths’. This will allow them to genuinely engage with consumers who are 50 and over on a level that engenders them to their brand. Those who do this right the first time will see their brands well positioned to succeed not only in the market of today but well in the future.” 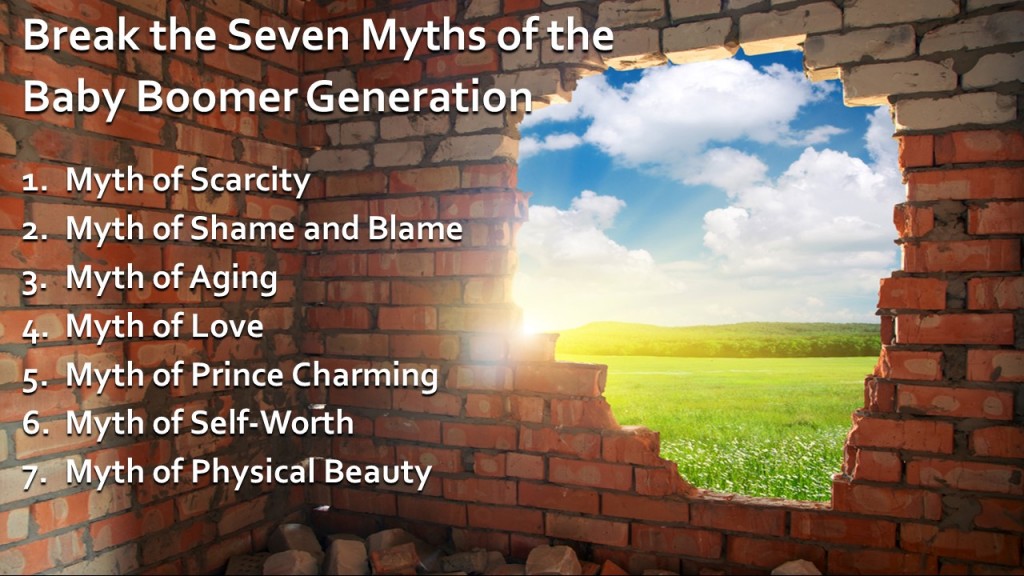 HOW CAN JOANIE ADVISE YOUR COMPANY?

A graduate of the University of California, Berkeley, with a Degree in Psychology, the multi-faceted career of Joanie Marx spans both the world of Hollywood and business. With 30 years as a full-time actress, and having founded and sold a multi-million dollar consumer product business, she knows how to represent brands and communicate a positive message when and where it matters most.

Whether it is through a one-on-one advisory capacity, serving as your brand’s spokesperson to the Baby Boomer market, or both, when it comes to reinventing a brand’s relevance with those over the age of 50, Joanie uses her unique expertise and engaging personality to transform your organization’s image and message in innovative and highly effective ways.

IS YOUR BRAND BABY BOOMER PROOF?

If so, now is the time to call 1-818-317-4415 or email Joanie Marx and schedule a complimentary consultation on how she can provide timely and profitable guidance on your next campaign to the 55 and over market. 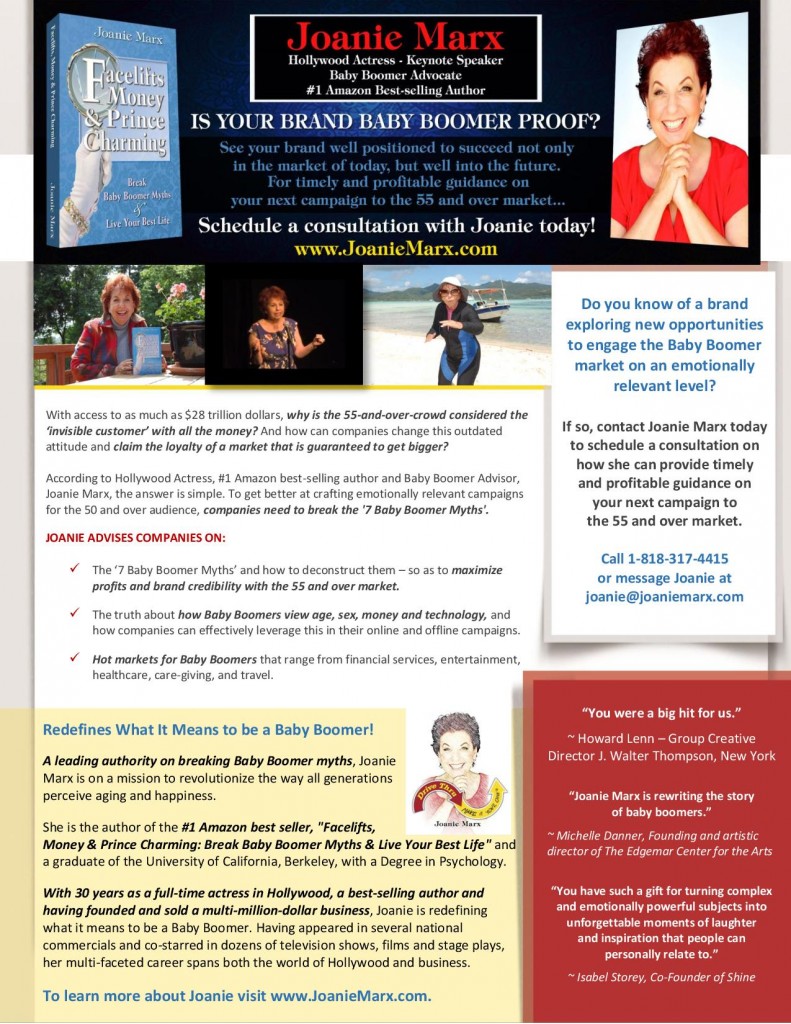